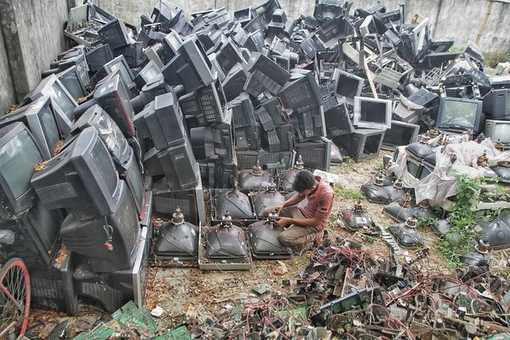 The rapid economic growth of India since liberalization illustrates an impressive Digital Revolution narrative. Following closely on the heels of the digital revolution is the tremendous growth in electronic waste. For the past two (02) decades India has been at crossroads on one side having enormous growth in the electronics industry while on the other side facing exponential growth of electronic waste (e-waste).

India ranks at 177 amongst 180 countries in the world & is one of the bottom five (05) countries at the Environmental Performance Index 2018, as per a report of World Economic Forum 2018. This was associated with poor performance at the environment health policy implementation& deaths occurring due to air pollution. In addition to this, India is ranked fifth (05) in the world as one of the top e-waste producing countries, only after China, the USA, Japan & Germany.

Today India generates approx. 400,000 tons of e-waste annually which is increasing at the rate of 10% to 15%. Seventy (70%) percent of which majorly comes from business houses & government institutions. The country formally recycles less than 2% of total e-waste produced annually.

Rekart being one of the leading Producer Responsibility Organisation (PRO) endeavoring the vision of managing waste (plastic, e-waste, solid waste, etc.) in metro cities while integrating technology-enabled approach, has aligned and connected hundreds of recyclers and scrap dealers from unorganized sectors to come together and approach the recycling method in a procedural and scientific manner. Here the informal/unorganized sector is referred to as scrap dealers / kabadiwalas who solely carry out 90% of the e-waste management in India. The majority of them are actually dismantling the products instead of following a scientific recycling method.

Until 2004, a concrete and formal reverse supply chain management of e-waste was not formulated which might had addressed the issue of health & safety of the scrap dealers or the informal recyclers. It actually highlighted the delayed response of the Indian government’s lack of policy regulation on e-waste management & the blind sightedness at potential business opportunities in an unexplored market segment. However, in 2016, the Ministry of Environment, Forest and Climate Change (MoEFCC) released updated E-waste (Management) Rules, which came in supersession of the E-waste management in India.

Landfilling: Most widely used methods of e-waste disposal. Trenches are excavated then waste materials/objects are buried and covered by layers of earth.

As per a study conducted by ASSOCHAM (The Associated Chambers of Commerce and Industry of India)& KPMG, computer equipment solely amounts to approx. 70% of the total e-waste generated, only followed by telecommunication equipment12%, electrical equipment 8% & medical equipment 07% while the remaining e-waste coming out of households. A major source of piling up of the enormous amount of e-waste comprising electronic &electrical equipment (WEEE) their import into India from foreign countries.

Unlike the waste management regulation and developed initiatives aimed at changing the consumer behavior in Japan and Europe, there is a vast gap or zero enforcement regulatory framework in addition to almost zero awareness and negligent sensitization compounds an inadequate occupational safety measure for people engaged in such recycling processes. Hence, it’s an urgent requirement for India to adopt& implement decisive strategies to practice re-use, refurbishing/recycling e-waste in specialized or focused facilities while targeting environmental contamination and human health hazards.

Opportunities of E-Waste Management in India

In 2016, the Ministry of Environment, Forest & Climate Change formulated and published the E-Waste (Management) Rules, with the aim to reduce production and increase the recycling percentage. Accordingly, the government shall introduce EPR thus making producers liable for collecting 30% to 70%of the e-waste they produce, in a span of seven (07) years.

Post this regulation; attempts have been initiated towards integrating the existing informal/unorganized sector. The German Agency for International Cooperation or (GIZ) has developed alternative business models for independent authorization of the informal sector.

Rekart was established in the line with this business model, promoting and targeting smart city-wide collection systems supplying the manual dismantling facilities with a strategy. Since E-waste combines rich sources of precious metals like gold, silver, copper it can be recovered and brought back into the production cycle.

Rekart advises recyclers to aim for higher revenue per unit of e-waste collected by replacing the traditional wet chemical leaching process for the recovery of precious metals like gold, silver to integrated smelters/refineries.

The E-Waste Management Rules, 2016 was amended in March 2018 to facilitate and implement an effectively environmentally conducive management system of e-waste in India. The amended revised targets & monitoring are to be done by the Central Pollution Control Board (CPCB).

As per the ASSOCHAM report, the government needs to collaborate with the industry and draw out some standard operating procedures (SOPs) and a strategic phased approach while focusing the agenda at reducing e-wastes at minimal. Simultaneously, the government should refer to ideas &methods adopted by environmentally progressed countries for practicing an efficient collection & recycling system.

The government must encourage entrepreneurs in the form of necessary financial support, tax concessions & technological mentoring for the establishment of e-waste recycling and disposal plants. In order to facilitate and streamline the mutual coordination between fragmented un- organized recycling sector government should play an active and crucial role of collaborator and mentor.

The idea of Extended Producer Responsibility (EPR) has been increasingly applied for the management of e-waste all over the globe because of its earlier demonstrated effectiveness and success in western countries. Herein, producers/manufacturers bear responsibility for e-waste management, state governments, consumers, municipalities, retailers, NGOs, Self-Help groups, CSOs Groups, local collection agencies like Rekart plays a significant role in the collection, creation of infrastructure, and running awareness drives to make e-waste management a success.

We as citizens generally throw away many small gadgets/ electronic products along with other wastes and barely make efforts to segregate them under different categories. The burning of e-wastes openly releases a number of hazardous substances such as dioxins and furans into the air. Actions by Resident Welfare Associations (RWAs) and societies should be taken in erecting separate bins clearly marked for collecting biodegradable and e-wastes.

Just like the government of many countries, E-waste management is an imposing challenge for emerging India and it is exponentially increasing day by day without any measures. It is the need of hours to integrate the informal and formal sectors to mutually collaborate for the collection, treatment, and disposal of e-waste. The concerned authorities of the country should utilize and establish mechanisms in managing and treatment of e-waste in a safe and sustainable manner. Encouragement to R&D organizations through financial aid and mentoring should be placed to devise alternatives of present e-waste compounds.