The Basics on 7 Common Types of Plastic 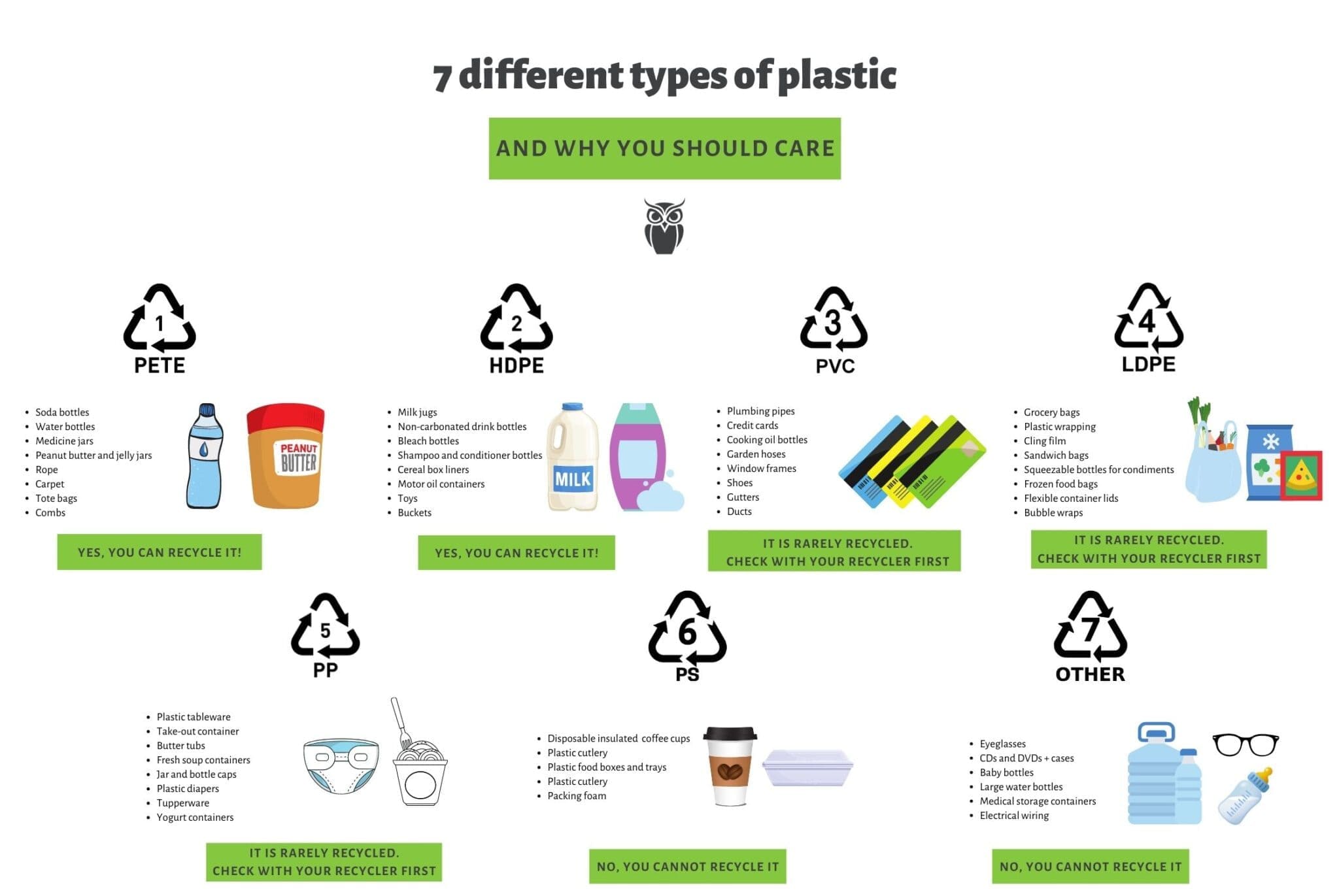 The Basics on 7 Common Types of Plastic

Plastics a commonly known name are a wide range of semi-synthetic and synthetic materials wherein polymers are the main ingredients. The chemical structure of plastic renders it resistant to natural processes of degradation/decomposition hence, they are slow to degrade/decompose. There are no organisms currently capable of decomposing plastic, so do not decompose as do other plants and animal wastes. Due to the constant large-scale production cycle, accumulation, and low decomposition rate, plastic waste has imposed the biggest environmental challenge for Earth’s ecosystem and biodiversity.

Since the year 2019, an estimated 368 million tonnes of plastic had been produced each year with Asia holding the majority of the production percentage at 51% against the rest of the world. This exponential increase in plastic production has forced the countries to enter into several treaties like ‘Vienna Convention for the Protection of the Ozone Layer (Montreal Protocol), ‘United Nations Framework Convention on Climate Change’ and many such other regional and global agreements to aim and regulate the factors responsible for damage to the Earth’s biosphere.

In line with methods of elimination of plastic waste, Plastic recycling is the most effective mode of lowering the waste menace to the environment. Recycling of plastic refers to the process of recovering waste or scrap plastic and reprocessing the materials into functional and useful products. Instead, the majority percentage of plastic can quickly reach recycling plants and get back into the chain of consumption.

Rekart a Producer Responsibility Organisation (PRO) initially functioning at tier 1 cities, is carrying forward the vision of managing waste from collection to disposal, in every smart city of India with a technology-enabled integrated approach. In order to understand the kind of work, Rekart is delivering one first needs to understand the types of plastics and the how why they are recyclable. For instance, there are seven (07) types of plastic we can get to know about -

1.            Polyethylene Terephthalate (PETE or PET) - Invented in 1940 by James T. Dickson & J. Rex Whinfield, PET’s production began in 1954 and since then has undergone several changes. It is now mostly seen as the transparent bottles we fill with a variety of liquids/beverages. Although the most commonly recycled plastic is PET due to the continuous enormous production process, it’s has become the biggest waste challenge on earth.

In 2016, it was estimated that 56 million tons of PET are produced each year resulting in 96% of all plastic bottles and containers in single-handily in the United States, out of which an estimated 25% were recycled. An immense amount of awareness and education about recycling is required to be imparted among people particularly children and youth to protect and revive our precious environment.

2.            High-Density Polyethylene (HDPE) - Invented by Karl Ziegler and Erhard Holzkamp in 1953, making use of a catalyst and low pressure, it was first used for pipes in storm sewers, drains, and culverts. HDPE does not break under exposure to extreme heat or cold and hence is the most recycled plastic type. According to the United States federal government Environmental Protection Agency (EPA), an estimated 12% of all HDPE products created are recycled in a year, which actually forms a very small percentage of the planet's annual carbon footprint (the number of greenhouse gases and specifically carbon dioxide emitted by some processes living or industrial during a given period).

3.            Polyvinyl Chloride (PVC) - PVC was synthesized in 1872 by German chemist Eugen Baumann. Later on Russian chemists Fritz Klatte and Ivan Ostromislensky commercialized the use of PVC. Further, in 1926 the method of processing PVC was proposed by Waldo Semon & the B.F. Goodrich Company. Under this process, a flexible PVC was obtained by the addition of various additives. Later on, PVC was commercialized and since long has been used widely in various industrial sectors.

PVC is known to be one of the least recycled materials. On average less than 1% of PVC plastic is recycled each year. It has been synonymously termed as the "poison plastic" because of the number of toxins present in its composition, impacting heavily on the well-being of our environmental ecosystem.

4.            Low-Density Polyethylene (LDPE) - Belongs to the Polyethylene branch of thermoplastics which is soft, lightweight, tough, and flexible in its nature. LDPE was the first polyethylene to be produced and hence can be termed as the grandfather of the material plastic. Due to the low mass density, it is considered as a separate material for the recycling process.

Currently, LDPE Packaging & containers make up almost 56% of all plastic waste, out of which 75% comes from residential households solely. Fortunately, Rekart in line with many recycling programs has evolved to handle such products contributing to lowering the percentage of LDPE filling up landfills and dumping grounds.

Polypropylene (PP) is a thermoplastic polymer made by the petrochemical industry and used in a wide variety of packaging items used for packaging for consumer products, plastic parts for various industries are produced as in for the automobile industry, devices like living hinges and also textiles. A huge portion of PP goes to waste leaving only a small fraction actually reach to recycling plants.

6. Polystyrene or Styrofoam (PS) - substance from natural resin and didn't realize that he has discovered a new compound. Later, German chemist, Hermann Staudinger did research over this polymer and elaborated its uses.

Since polystyrene is of low-density mass it breaks with little pressure. Beaches and seas all over the world are littered and filled with pieces of polystyrene, endangering the existence of marine animals out of which many species are already extinct. Researches across the world report that half of the sea turtles and over half of seabird species worldwide have ingested plastic waste as food causing them to starve to death and rapidly moving towards extinction.

7. Miscellaneous Plastics Apart from the above some other types of plastics include polylactide, polycarbonate, acrylonitrile butadiene, acrylic, styrene, fiberglass, and nylon. Most of the recycling programs apply several plastic classifications to segregate every type in an effective manner.

With the growing awareness, a good percentage of people and organizations are turning towards bio-degradable products and maximizing the recycling of plastic-based materials. But in comparison to the amount of waste already existing and recycled, the efforts actually implemented are on a minuscule scale. The world must act now to prevent the problem from getting worse, as we already have far too much on our plate. An urgent reminder to everyone is that we may have a new plate available every time we eat, but not to forget we have only one Earth to live upon.